On April 10, we presented our arguments at the first congressional hearing on the legalization of early abortion in Argentina, where eight different bills are to be analyzed. On the morning of the first day of hearings, 16 presenters expressed support for the text introduced by the National Campaign for the Right to Legal, Safe and Free Abortion, which has been endorsed by 72 members of the Chamber of Deputies (Argentina’s lower house of Congress).

Gastón Chillier, the executive director of CELS, made his presentation after Paola Bergallo, Andrés Gil Domínguez, Marta Alanis, Mariana Romero, Marcelo Alegre and Nelly Minyersky. He spoke about the contribution of treaties and international human rights jurisprudence to the debate. He noted that those who tend to oppose legalization with legal arguments make a fallacious and forced interpretation of the law. He also emphasized how the state’s criminalization of the voluntary interruption of pregnancy violates human rights: the right to life, to health, to physical, psychological and moral integrity, to autonomy, intimacy, dignity, to be free from violence and cruel, inhuman and degrading treatment, and to equality for women, girls and people with the capacity to gestate.

As the seven-minute presentations were made back to back in Annex C of the Congress, outside on Rivadavia Avenue the green scarves associated with the National Campaign were brandished  by members of organizations, activists and spontaneous demonstrators who celebrated the bills’ consideration at the plenary of committees. This is the seventh time that the Campaign has presented its bill, which has been modified over time. Before the farthest it had gotten in its legislative consideration was when the Criminal Legislation Committee included it in its agenda in 2014, and later tabled it. Now, the General Legislation Committee – chaired by Daniel Lipovetsky, a deputy for the governing Cambiemos coalition – is at the head of the four committees that must take action (the others are the Criminal Legislation, Family and Health committees).

In 2014, jointly with Amnesty International Argentina and ELA, we took collective legal action against the National Health Ministry, demanding that it provide all the necessary services to comply with the interruption of pregnancies allowed for in Article 86 of the Penal Code, because, despite the ruling in the F.,A.L. case, legal abortions are still inaccessible in most cases. In addition, in 2016, we denounced the laboratory Laboratorio Beta before the Commission for the Defense of Competition for abusing its monopolistic position, along with Lesbians and Feminists for the Decriminalization of Abortion and the Gender Secretariat of Nuevo Encuentro CABA. We also requested that the health authority, ANMAT, recognize and regulate the gynecological use of misoprostol. As long as access to this medicine deemed essential by the World Health Organization (WHO) is not resolved, this laboratory continues to profit from women’s lives and health, and the state does not guarantee its accessibility.

It was important for CELS to convey to the national deputies present what it means to uphold criminalization: it does not dissuade women from interrupting undesired pregnancies, it just forces them to do so in a clandestine and, in many cases, unsafe way. This institutional approach is discriminatory, because it has a dangerous impact on the youngest and poorest pregnant women. If they need to turn to a health center, they often come up against institutional violence, and they are vulnerable to becoming the victims of torture or cruel, inhuman and degrading treatment. As in the case of Belén, where we acted as friends of the court, this causes the systematic criminalization of women who seek medical attention for an obstetric emergency. Belén experienced a miscarriage, but criminal prosecution targets miscarriages and induced abortions alike, premature deliveries and other pregnancy complications. This public policy pushes women to take clandestine action and risk dying, out of a justified fear of ending up in jail.

Chillier closed his presentation by addressing the audience: “Congress has the historic opportunity to correct and repair inequality in women’s rights.” 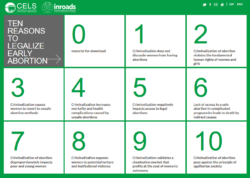