Argentina’s Senate – with 31 votes in favor and 38 against the bill passed by the Chamber of Deputies – chose to deny women and trans men the right to decide about their bodies, reinforcing instead clandestine conditions, criminalization and the risk of death for those who opt to voluntarily interrupt a pregnancy. They made this decision turning their back on public health arguments, on the assessment of health ministers from distinct governments, on legal arguments, on the standards of international human rights law, and on the millions of people demanding this right on the streets, on social media, in schools and in the workplace. A cross-party coalition of legislators took up the commitment to expand rights. Another group, in contrast, decided to restrict them, thereby ensuring that the opportunity to advance toward a more egalitarian democracy would be lost.

Since 2015, the movement of women, lesbians and transgender people has marked a before and after in Argentina. In 2018, this immense and unstoppable social mobilization achieved another milestone: the collective, cross-cutting and cross-generational cause secured the Chamber of Deputies’ approval of the bill, which had been steadfastly promoted by the National Campaign for the Right to Legal, Safe and Free Abortion since 2005. This is not the first time that Argentine society has taken to the streets to demand more democratic laws and institutions and to confront the interests of those who seek to uphold the status quo: this occurred when dictatorship-era crimes against humanity remained unpunished; it happened again, in recent years, as part of judicial and political processes that culminated in the expansion of rights, such as the approval of same-sex marriage and gender identity legislation.

As we have done in the past, we will keep insisting in the future. So that abortion is recognized as a right and its exercise is guaranteed by public policies, so that those with the capacity to gestate can choose without endangering themselves, so that the lack of economic resources does not condemn anyone to forced maternity. Our movement does not stop today, nor will it put away the green scarves that symbolize this fight. On the contrary, today there are more of us and we are even more united. Today, we are millions. 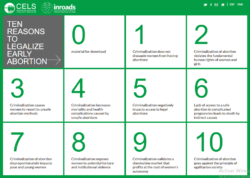