We initiated this case before the European Court of Human Rights (ECtHR) after Edward Snowden’s courageous 2013 revelations of the full extent our governments are willing to spy on us without reasonable suspicion.

Today, we celebrate the court’s historic findings that the UK’s system of communications interception was an unlawful breach of privacy. The UK’s regime for authorizing mass interception was incapable of keeping their privacy “interference” to what is “necessary in a democratic society.”

INCLO parties in the case

“This is a major victory for the rights and freedom of people in the UK. It shows that there is – and should be – a limit to the extent that states can spy on their citizens. Our Government has built a surveillance regime more extreme than that of any other democratic nation, abandoning the very rights and freedoms terrorists want to attack. It can and must give us an effective, targeted system that protects our safety, data security and fundamental rights.”

“In a significant victory for privacy and free expression, the European Court of Human Rights has ruled that the UK government’s mass surveillance activities violate fundamental human rights standards. The decision sends a clear message that similar surveillance programs, such as those conducted by the NSA, are also incompatible with human rights. Governments in Europe and the United States alike must take steps to rein in mass spying and adopt long overdue reforms that truly safeguard our privacy.”

“CCLA is proud to share this victory for privacy and free expression rights with our colleagues around the world. Today’s decision at the ECtHR confirms that mass surveillance is incompatible with fundamental rights that are at the heart of strong democracies. Although the case addressed activities in the UK, this is a global issue that affects every nation and every person who communicates online. Canada now needs to look carefully at our own new national security legislation to ensure that our laws uphold the vital privacy and free expression principles at the center of this decision.”

“As a member of an international human rights network, the HCLU is thrilled to celebrate this milestone in privacy rights. Ever since Edward Snowden made visible the secretive nature of communications interception by government intelligence agencies, INCLO has been steadfastly advocating against this opaque practice. The court decision today is a vindication of all INCLO members’ efforts – and for privacy activists around the globe.”

“Why should we have to hide from snooping governments? Recognized under numerous instruments, treaties and international norms, privacy is our foundational right upon which many of our associated freedoms operate. The decision in Strasbourg recognizes in part what INCLO’s Unanswered Questions – International Intelligence Sharing report also observes: across INCLO member countries there are inadequate rules guiding the operation of state intelligence agencies.”

“Communications from an LRC email address were intercepted by the GCHQ in breach of our privacy rights under Article 8 of the European Convention on Human Rights. The LRC represents some of the most vulnerable clients in South Africa; their right to confidentiality was violated. We applaud the Strasbourg ruling that UK laws enabling mass surveillance are a violation of Article 8 and look forward to using this important precedent to advance the right to privacy across Africa.” 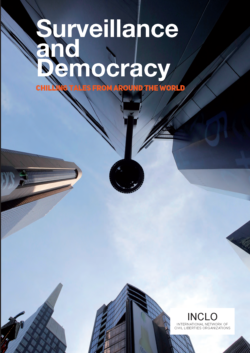 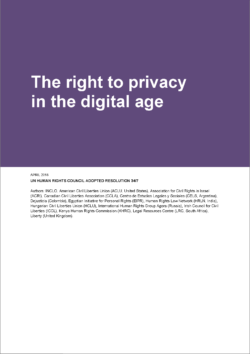