We set out to build up-to-date information on the magnitude and characteristics of the criminal prosecution of abortions and obstetric events. The survey covers two very different types of situations: first, the criminal proceedings initiated for voluntary terminations of  pregnancies. Second, we surveyed the criminal proceedings in which the death of “a newborn” in the moments immediately after delivery is attributed to the behavior of the pregnant woman, be it in situations of premature births, miscarriages, or deliveries at term.

The investigation focuses on these two types of events because of the relationship that we can establish between them: they are criminalized by  the illegality of abortion in Argentina (outside of the grounds established in the law), the stigma and the scope of its long punitive shadow.

Our question about how the criminalization of abortion operates was not restricted to the causes labeled with that criminal figure, which is what the law recognizes as persecution in those cases. Rather, we reconstructed from the true underlying logics of criminalization that bear other figures of criminal offense and other events related to pregnancy, but which are not always proper abortions. In other words, the universe of women criminalized for the notion that abortion is a crime is broader than the set of cases judicially labeled with the criminal figure of abortion.

This report has two sources of data. Using a corpus of newspaper articles from more than 50 national media outlets, we were able to make a qualitative analysis of who the criminalized people are – generally poor cis women with children – and what characteristics the processes have. Based on the responses to official requests for access to public information, we were able to quantitatively restore the criminalization data.

Data from the provinces of Santa Fe, Río Negro, Chaco, Chubut, Córdoba, Neuquén, Formosa, Catamarca, Corrientes, Tucumán, Mendoza and of the Federal Justice System which handles these cases in the City of Buenos Aires y la Justicia Nacional yield the result of 825 cases for abortion and 37 for obstetric events.

Most of the criminalized women belong to vulnerable social sectors: they do not have paid work, their level of formal education is low and they live in precarious housing conditions. They are under 30 years old and many have one or more children.

In the criminal proceeding against them, the majority did not have access to an attorney and their rights were violated. This is but one example of the selectivity with which criminalization operates.

If we look at the overall operation, as a system that occurs between police agencies, the judiciary, health professionals, the press and, later in some cases, the penitentiary system, the punishment device that is used comes to light. We can also see the effects it has on the lives of these women from the moment they are identified as criminals. Regardless of the result of the judicial process, the punishment strikes them and affects those around her, such as children and other relatives. 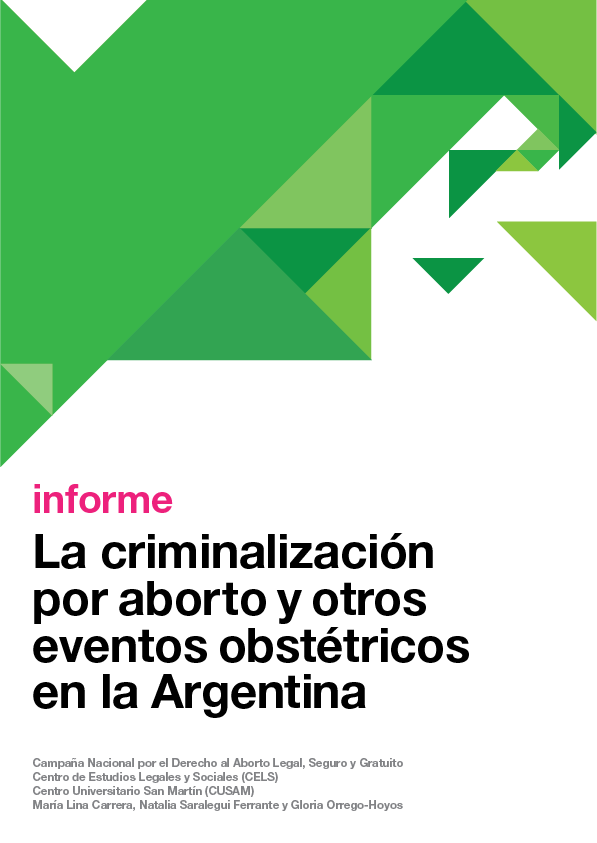