After months of resistance to discussing the issue of migratory regularization, at the fourth round of negotiations, various state representatives stressed the need to incorporate it in the Global Compact as a central policy for responding to the irregular status of migrants living in their destination country.

The representative of the African Group’s 54 countries spoke to this effect. She sustained that “to prevent and reduce rights violations, it is necessary to develop broad and permanent programs and policies with clear, affordable and accessible procedures that guarantee access to documentation and migratory regularization.” Meanwhile, the delegate from Brazil – on behalf of 13 Latin American countries (Argentina included), Bangladesh, Nepal and the Philippines – said: “We believe that regularization should be included as a policy option for member states.”

The European Union, meanwhile, clarified its position and recognized that regularization is one of the possible solutions to situations of migratory irregularity.

During this round of talks from May 14 to 18, some consensus was built around the need to incorporate the principle of non-refoulement into the Compact and give more centrality to due process and the individual analysis of migration situations. Some states even proposed regularization when return is not possible due to migrants’ social ties to their destination country or to family unity considerations.

Although the discussion seems to have advanced, these positions must be explicitly included in the next draft of the agreement. To achieve a Compact that promotes and protects rights, we will keep working with other actors to get regularization included in at least one of the text’s objectives, along with the oversight of expulsions, the non-criminalization of migration and access to justice. When a new draft is released in the coming days, a key negotiating moment will begin as states forge consensus over the agreement’s precise terms.

CELS presented specific wording proposals for the Compact, based on the joint document that we prepared with Asylum Access, Caref, Conectas, Fundar and Diego Portales University. And we shared our arguments with the delegations present at UN headquarters in New York via a pamphlet entitled Migratory regularization: it benefits everyone.

For more information, see our article A Global Compact to return migrants? published by openDemocracy, as well as How to fulfil the promise of the Global Compact for Migration with a more effective roadmap in human rights protection, written by Pia Oberoi of the UN Office of the High Commissioner for Human Rights, in her personal capacity. 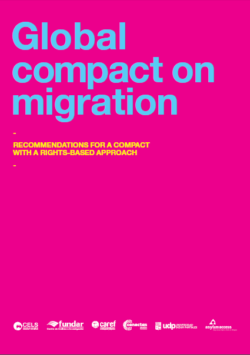