Argentina will be reviewed in the United Nations Human Rights Council on Monday, January 23. It will have to report to its peers on compliance with its international commitments on human rights matters. CELS, along with other organizations, produced reports as prior contributions for the assessment and recommendations to be produced by this mechanism. We will also be present at the session in Geneva.

Germany, Switzerland, UK, and US Called to Account for Not Supporting a Comprehensive Waiver of Intellectual Property and Mandating Pharmaceuticals Transfer Technology.

US, UK, Germany, Norway, and Switzerland in violation of international human rights law in “prolonging the pandemic” ahead of vital World Trade Organisation meeting .

After receiving the document, the international organization urged Bolivia to investigate the violations committed by Jeanine Áñez’s facto government. These crimes remain unpunished to this day.

Along with the Vladimir Herzog Institute and five other organizations, we denounced the Brazilian authorities for their declarations on the anniversary of the 1964 military coup to the Special Rapporteur of The United Nations on the promotion of truth, justice, reparation and guarantees of non-recurrence.

Vanessa’s deportation is proof of the inherent threats involved in Argentina’s immigration policy as modified by presidential decree. The decision to revert her expulsion is a step forward towards the restauration of children’s rights.

The Committee of the Convention on Migrant Workers (CMW) determined that the decree breaches international treaty ratified by Argentina in 2007.

More than 160 UN member countries endorsed the Global Compact for Migration at an intergovernmental conference held on December 10-11. This agreement includes some important advances, above all in a context of growing xenophobia and nationalism in Latin America and the world.

At an intersessional meeting of the Commision on Narcotic Drugs (CND) of the United Nations, CELS made a presentation addressing the “fight” against drug trafficking, militarization of public security and its harmful effects on human rights. The discussions at the CND will culminate in March with a review of the global drug strategy over the last decade.

US National Security Adviser John Bolton made explicit and concrete threats against ICC judges, prosecutors and personnel if they proceed with an investigation into alleged war crimes committed by US forces in Afghanistan. A group of national and international organizations requested that the UN Assistant Secretary-General for Human Rights take urgent action in response. Our joint letter to him follows. 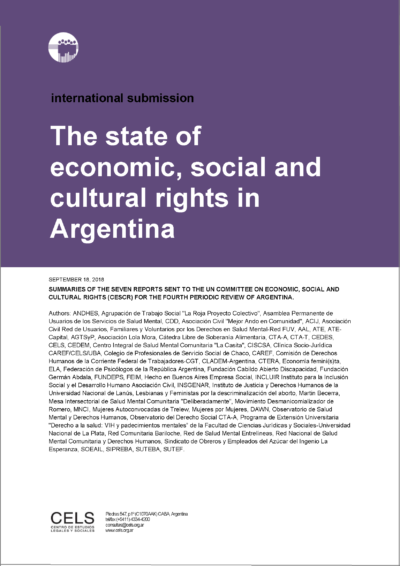 The new Global Compact represents a turning point in the international management of migration. But much work remains to ensure that its implementation is focused on the protection of the rights of migrants.

During the final round of negotiations on the Global Compact for Migration, 40 organizations urged UN member states to ensure that the accord fully incorporate a rights-based approach. The last draft includes changes that reinforce a focus on control and security. If this is validated, countries will have wasted a historic opportunity to fuel a paradigm shift.

The US ambassador to the UN said that her country’s decision to abandon the Human Rights Council was partly due to the opposition of 18 organizations to the Council reform proposal backed by Washington. CELS, one of these organizations, responded to her.

The Working Group on discrimination against women urged the Argentine state to approve the bill to legalize the voluntary interruption of pregnancy. This is the latest in a series of such recommendations by UN bodies, based on human rights considerations.

CELS participated in the last hearing in Congress on legal abortion. Edurne Cárdenas spoke there about the need to guarantee access to this right.

At the fourth of six rounds of negotiations on the Global Compact for Migration, state delegations from various regions defended the importance of addressing regularization procedures.

“Enough is Enough”: 95 civil society organizations call on the UN Human Rights Council to urgently launch a Commission of Inquiry to investigate violence against protesters in Palestine.

The latest draft of the Global Compact for Migration avoids mentioning the regularization of those who are already living in their destination country, which is a serious omission. Opinion piece by Camila Barretto Maia, Diego Morales y Raísa Ortiz Cetra.

The UN Special Rapporteur on torture, upon concluding his visit to the country, said that detention conditions in provincial police stations and prisons “severely contravene international standards and are incompatible with human dignity.” He also denounced the “degrading” conditions in the Melchor Romero psychiatric hospital and police violence in low-income neighborhoods. At the same time, he urged the Argentine state to allocate “sufficient resources to ensure the timely processing and adjudication of the remaining cases and trials for crimes against humanity.”

The UN Special Rapporteur on adequate housing presented a report on housing strategies that promote socioeconomic equality and inclusion. It mentions examples from numerous countries, including Argentina. 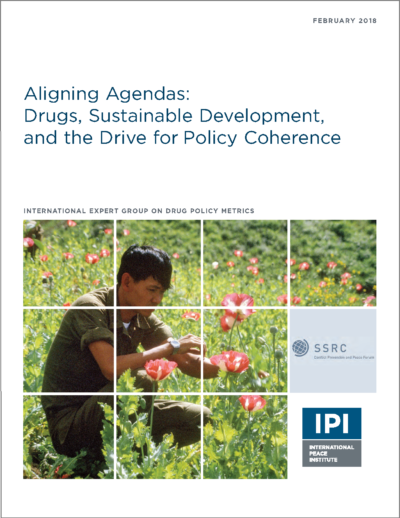 At the UN, States will begin negotiating the Global Compact on migration. CELS and five other organizations present concrete measures that the Compact should include to guarantee migrants’ rights. 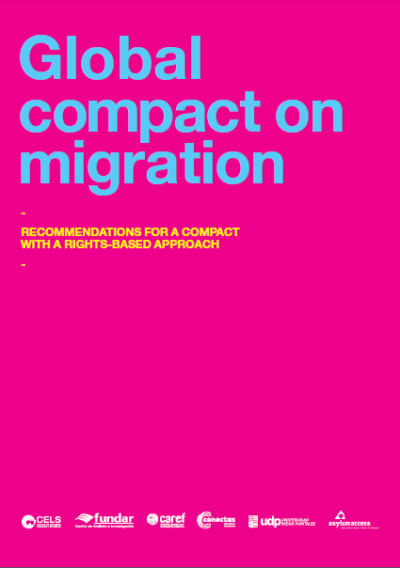 We debated about what the UN can do to introduce human rights in the implementation and monitoring of drug policies during a briefing in Geneva.

National organizations presented their assessments for the Universal Periodic Review (UPR), a peer evaluation of the human rights situation in each of the UN’s 193 member states. Argentina will be evaluated in early November.

A follow-up report is presented to the UN Committee on Enforced Disappearances regarding the Argentine state’s response to the disappearance of Santiago Maldonado.

The UN Committee determined that the disappearance of Santiago Maldonado requires “urgent action by the state party to search for and locate him” and to identify those responsible.

The Inter-American Commission on Human Rights (IACHR) granted the precautionary measure in favor of Argentine social leader Milagro Sala, making it clear that she cannot remain in prison any longer. Sala has been arbitrarily detained since January 16, 2016, when she was arrested over a protest. The precautionary measure was requested by Amnesty International, Andhes and CELS.

The Global Compact on migration could be an unprecedented intergovernmental tool but the majority of states have expressed an interest in intensifying the current model, centered on controls and security, instead of transforming it.

The construction of new drug policy indicators could help to achieve the sustainable development agenda. The situation of women incarcerated for drug-related offenses is especially worrisome.

“Regulating migration” must stop being equated with impeding or criminalizing migrants. In regional and international forums, we promote alternative models that guarantee their rights.

The Argentine state’s compliance with the Convention against Torture will be evaluated on Wednesday, April 26 and Thursday, April 27. CELS submitted a report to the UN Committee that carries out the evaluation and contributed to two reports produced with other organizations. 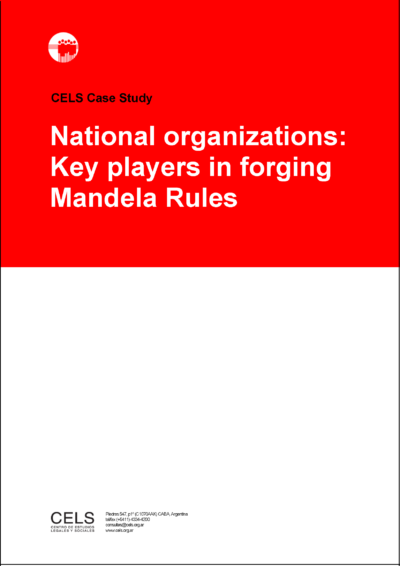 Organizations from 27 countries sent a statement of support for the Committee on Enforced Disappearances and urged that its mandate be renewed.

The UN Committee on the Elimination of Discrimination against Women released its concluding observations regarding Argentina.

The United Nations intergovernmental working group in charge of designing the treaty met in Geneva.

UN member countries are discussing a New Urban Agenda, which aims to set international standards for reducing the number of households without housing and achieving sustainable urban development over the next 20 years.

Dialogue between the UN Human Rights Committee and the Argentine state regarding compliance with the International Covenant on Civil and Political Rights.

The global crackdown on drugs has spurred violence akin to war in some Latin American countries. But the world’s historically powerful countries are still reluctant to confront a problem they don’t recognise as their own.