On December 14, the Argentine government responded to massive social discontent over the possible approval of a pension system reform with an unprecedented deployment of the federal security forces. In the face of widespread demands, the executive branch decided to surround the city center of Buenos Aires with security forces, in a way that made participants vulnerable before the demonstration had even begun. This was a disproportionate and violent police operation that sought to intimidate, repress and punish the exercise of the right to protest.

Despite the deluge of images contributed by press workers and demonstrators that documented the forces’ violent action, the country’s political authorities did not explain any aspect of the operation: they provided no information on how it was organized, what the justification could have been for putting four different federal security forces on the streets, or what instructions they received. The way in which the Gendarmerie and other forces acted indicates that the operation was aimed at keeping the demonstrators from reaching the barriers that had been erected and at repressing them, to create a chilling effect. There is no other explanation for staging an operation of this kind.

The use of force and of so-called “less lethal” weapons (or crowd control weapons) violated all existing protocols: rubber bullets were shot indiscriminately and aimed at people’s bodies, tear gas was used without precaution, and pepper spray was also utilized in an abusive way. In addition, the security forces sought to limit the work of journalists with rubber bullets and blockades to keep them from capturing images of the detentions and injuries.

As a consequence of this operation, there are more than 40 people detained at the disposition of the federal judicial system. The majority of them have been detained for the crime of “public intimidation,” even though nothing justifies the use of this offense or of federal jurisdiction. The images of the repression also show that many people were apprehended for no reason. In other words, as a result of the arbitrary action taken by security forces in the streets, a large number of people were deprived of their liberty.

A day after these incidents, and despite the evidence of police brutality, the Security Ministry remained silent about the violence deployed and made no mention of whether internal administrative inquiries had been initiated. Nor did any other member of the executive branch publicly question this type of state response to social protest.

Although yesterday’s security force operation is troubling because of its size and high degree of violence, many of the practices carried out there have become recurrent. During 2017, numerous police operations in the city of Buenos Aires included:

*Police roundups
*Disproportionate, irregular and illegal use of force
*Aggressions against press workers and those who record police action
*Lack of information about where people have been detained
*Lack of subsequent information on the operation regarding the orders given, the weapons used, the forces involved, the number of officers and the number of detained and injured persons.

The judicial response to the repression of protests also follows a repetitive logic: there is no judicial oversight of the security operations, the arguments that the forces use to detain people are validated, and demonstrators and passersby are charged with serious offenses, regardless of whether or not there is proof they committed them.

This scenario is compounded by constant messages on the part of the government that seek to delegitimize the actors involved in the protests.

This combination of political messages against protest, violent police action and a criminalizing judicial response consolidates a context of state “public intimidation” aimed at demonstrators, which seeks to discourage street mobilizations. These practices constitute ways of limiting the right to protest, which is an essential component of democracy.

We thank Javier Valente for this photograph (taken on December 14, 2017), and ask that the source be credited. 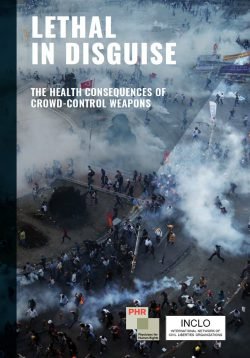