We have updated our Right to Protest platform with new videos, articles and interviews contributed by activists, journalists and experts from throughout the world. This editorial partnership explores the power of protest and the many links between human rights and social protest.

Some recent highlights include pieces on how Canada spies on its own indigenous communities, the criminalization of protest in Europe, a video on extractivism and agribusiness in Latin America, and environmentalists’ successful challenge to Tasmania’s anti-protest laws. Other articles focus on the militarization of protest policing, six reasons why protest is so important for democracy, and threats to the right to protest in Argentina that have come to a boil in the last 10 days.

Our aim with this project has been to bring together voices that don’t often interact, due to geographical distances, language differences, different fields of expertise or the segmentation of debates in the global north and south. We hope this shared platform will foster more exchanges to bridge these gaps, at a time when social protest is on the rise worldwide and states often respond with violence.

Many other INCLO members participated in the Right to Protest project: the Association for Civil Rights in Israel (ACRI), the Canadian Civil Liberties Association (CCLA), Dejusticia in Colombia, the Egyptian Initiative for Personal Rights (EIPR), the Hungarian Civil Liberties Union (HCLU), the Kenya Human Rights Commission (KHRC) and the Legal Resources Centre (LRC) in South Africa.

For more information specific to CELS’ work on social protest, see The Right to Protest: Acting Early and Taking it Global. 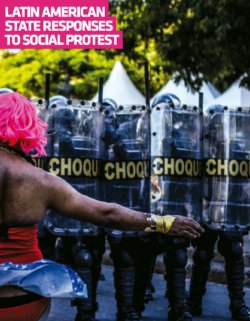