Good morning. First of all, I want to celebrate the fact that the Chamber of Deputies has promoted this debate. It is an honor to participate today in this closing session of the presentations that have taken place over nearly two months, with more than 650 speakers who have contributed arguments based on science, the law, philosophy, social sciences and the firsthand experience of women and trans men, to nourish a parliamentary discussion that we have owed ourselves in these more than 35 years of democracy.

During nearly two months of debate, different viewpoints have been set forth, many of them straying far from evidence or rigor. All have been heard in a patient, democratic exercise that is being watched, followed and praised in other countries because, as others here have said, abortion exists, has existed and will exist, and what this is about, and what brings us here, is to discuss and question the implications of using criminal law to punish a health practice that only affects women.

We have heard very solid presentations regarding the standards of international human rights law, including contributions that have traced the history of how international human rights law has been forged, recalling the discussions involved in drafting international instruments, the constitutional debates and a thorough review of the standards themselves, in particular regarding the observations and recommendations that treaty bodies have made to Argentina throughout the years.

We can affirm with great certainty that it is totally false that international human rights law can be used to criminalize abortion. On May 9, we participated along with other organizations and representatives of the national government in a hearing held by the Inter-American Commission on Human Rights in which Commission members emphasized that Argentina must ensure full and effective access to those abortions that are already legal, and incorporate the international standards and instruments ratified by the country into our legislation.

The Commission’s president and Rapporteur on the rights of women, Margarette May Macaulay, stated at this hearing that “the standards are clear: women have the right to autonomy to decide how they use their bodies, and the state has to ensure those rights, in particular for children and young persons.” She also affirmed that the executive branch has the duty to convey Argentina’s international obligations to members of Congress when the time comes for legislating.

Human rights bodies, belonging both to the universal and inter-American systems, have analyzed the incremental protection of life and have pointed to the various negative impacts that the criminalization of abortion has on the human rights of women, girls, adolescents and trans men. The CEDAW Committee, in its General Recommendation 35 on gender-based violence, made clear that forced pregnancy, the classification of abortion as a crime, the denial or delay of safe abortion and post-abortion care, the forced continuation of pregnancy, and the abuse and mistreatment of women and girls who seek sexual and reproductive health information, goods and services – in addition to violating the rights to health – are forms of gender violence that, depending on the circumstances, may amount to torture or cruel, inhuman or degrading treatment.

The Committee on ESCR in its General Comment 22 – which establishes the content and scope of the right to sexual and reproductive health in accordance with Article 12 of the International Covenant on Economic, Social and Cultural Rights, which has constitutional standing in Argentina – indicated that one of the biggest problems that women face in the full exercise of their sexual and reproductive rights are the diverse legal barriers and practices that hinder them, in particular those imposed on contraception and abortion. It also stated that one of the minimum obligations for respecting the right to health is to refrain from creating barriers in access to goods and services, and that this obligation requires repealing laws and policies that erect access barriers as well as eradicating obstacles that exist in practice.

Together with other organizations we produced “Legal Abortion,” a brief document that brings together arguments, legislation and jurisprudence with the aim of contributing to this congressional debate on the legalization of abortion in Argentina. I want to encourage you to use it.

Less than one week ago, the people of Ireland decided by an overwhelming majority to remove the constitutional obstacles to modifying the strict legislation that prohibits all abortions. Here we are also witnessing a key moment in our history, but we face another situation: for nearly 100 years, our legal code has authorized abortion under certain circumstances in a model known as one of indications. For years the interpretation of these indications sparked controversy until, in March 2012, the Argentine Supreme Court ruled in the “F., A.L.” case, clarifying the scope of non-punishable abortions and establishing concrete obligations for guaranteeing them.

The experience of the last six years has shown us that barriers and obstacles remain and that the indications model currently in force is not enough. In nearly all of the country’s jurisdictions, there continue to be dilatory or arbitrary requirements, judicial intervention in the practice due to a lack of legal information on the part of health professionals who fear criminal sanctions, the abuse of conscientious objection with state tolerance, or the lack of explicit regulations establishing these necessary services as essential health service practices.

And this is a clear example of institutional violence. Institutional violence is a violence perpetrated through obstacles in access to rights; and their impacts can be seen in the violated human rights of women to life, to health, to physical, psychic and moral integrity, to autonomy, intimacy, dignity and to freedom from cruel, inhuman or degrading treatment. All of these rights are recognized in the national Constitution and in diverse international instruments that have constitutional standing and others that prevail over national laws.

Just days before June 3, it is important to highlight that the effects of criminalization produce gender violence in the terms defined by Law 26.485.

The criminalization of abortion has served to reinforce social stigma and push women into clandestine practices and death. I was born and raised in Tucumán province, where during a special mass on May 25 the archbishop named each and every member of the Chamber of Deputies representing the province, pressuring them to vote against life, against dignity, equality, health, against the legalization of abortion.

Esteemed deputies, today you must consider whether the voluntary interruptions of pregnancy will be carried out in conditions of safety, equality and dignity, or if you will allow them to remain illegal. You have the opportunity to legislate to expand rights, to make of our country a more just, more egalitarian democracy, with more social justice. You have the obligation to legislate in accordance with law, respectfully observing the standards of international human rights law. This is a call to strengthen our democratic institutions.

The infinite number of green scarves seen on the streets, on purses and school backpacks, is both striking and moving. You hold in your hands the possibility of legislating for the future.

You have a chance to make history: the future is here and the time is now. 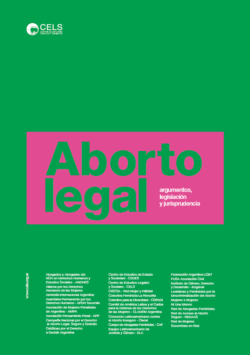